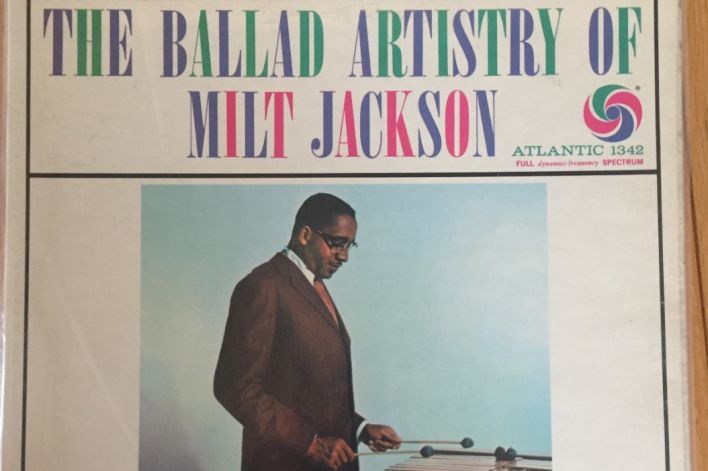 Sixty years ago today on May 1, 1959, the Detroit-born vibraphonist Milt Jackson completed the first of three studio sessions for “The Ballad Artistry of Milt Jackson” (Atlantic). This was the first time that Bags recorded with strings. Most of the arrangements were written by his close friend Quincy Jones, with a handful also contributed by Jimmy Jones. I wouldn’t call it an essential record, but it’s still a heartwarmer. All love songs, save an opening medium blues. Think Bags in Sinatra mode — the leader singing flowing melodies on the vibes with a sublime purity, storyteller expression, and exquisite phrasing. Jackson’s vocal approach reminds you that his fundamental innovation was to slow down the motorized tremolo speed of the vibes and employ softer mallets to better approximate the qualities of the human voice. The result was a warm, vibrato-like quality, a slow pulsation of sound without the nervous twitching of earlier vibraphonists.

Sometimes on “The Ballad Artistry,” Jackson’s improvisations bloom in a burst of passion, but on many of the songs he favors restrained embellishments that arrive gently, as if pressed softly into a lover’s hand.  Interestingly, several of the songs were, in fact, closely associated with Sinatra at the time, including “I’m a Fool to Want You,” “Deep in  Dream,” and “Don’t Worry ‘Bout Me.” The last song on the record, “Tommorow,” is a pretty Jackson original that he seems to have never again recorded. Q ‘s string arrangement swaddles the vibes. An alto flute peeks through in the introduction and coda and once along the way, but otherwise Bags has the spotlight to himself.  The opening of the melody bears a striking similarity to an Erroll Garner song, “No More Shadows,” from two years later. Both begin with the same toggling melodic and rhythmic gesture —  an upward leap of a minor 3rd to the 5th of the tonic chord on beat one of the first bar and then a similar leap of a major 4th to the same note in the second bar. The songs then head in different directions, but the parallels are such that I wonder if Garner heard Jackson’s record before composing his piece.

And here’s a piece I wrote about Garner’s composing for WBGO in which there’s a clip of “No More Shadows.” https://www.wbgo.org/post/considering-erroll-garner-composer-exclusive-premiere-nightconcert#stream/0