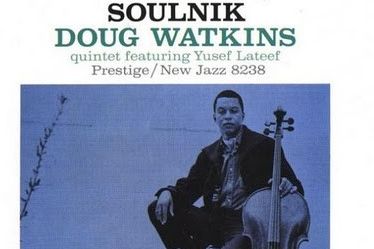 Detroit-born bassist Doug Watkins, who died in an auto accident at age 27 in early 1962,  appeared on roughtly 100 LPs in his short life. But he made just two as a leader. The first “Watkins at Large,” was taped in 1956 for the Transition label. The second, “Soulnik,” was recorded on this day, May 17, in 1960. It’s an unusual session in that Watkins is heard on cello for the first — and only — time in his career on record. According to the late Ira Gitler’s liner notes, Watkins, who plays the cello exclusively on “Soulnik,” had always wanted to try the instrument. He borrowed one from a friend three days before the recording — but the first time he actually played it, according to the notes, was at the session.

Frankly, I don’t know how complicated it is for a gifted bassist to make such a shift, but to turn on a dime isn’t routine. The strings of a bass are tuned in fourths, while cello strings are tuned in fifths. Watkins never appears to be struggling.  He does plays only pizzicato (plucked), so it’s a jazz bass-like approach in that sense. Watkins treats the cello as a second horn, joining Yusef Lateef ‘s flute and oboe on the front line. Fluently articulated, the cello solos dance with bebop melody and rhythm — Watkins was mentored by pianist Barry Harris in Detroit.

Watkins also attended high school at Cass Tech, where he became close friends with fellow bassist Paul Chambers, who was a year younger. Many sources say that the two were cousins, but, in fact, they were not related. They were, however, as close as brothers, and their approaches were similar. Both had tones that purred, and both had deeply swinging beats, though there was an extra spark of charisma in Chambers’ soloing. Still, I once heard Barry Harris say that he actually preferred Watkins’ beat to Chambers’ — though Harris quickly added that he loved how both men played.

The minor-key “Andre’s Bag” is Watkins’ sole composition on “Soulnik” and offers his most extended playing on the date. The rubato opening sets a dramatic tone and there’s an exotic, vibe to the melody. The rest of the band is heavily weighted with Detroiters, including Lateef, pianist Hugh Lawson, and bassist Herman Wright, with the New Jersey-bprn Lex Humphries on drums. Hey! How did he get in here?