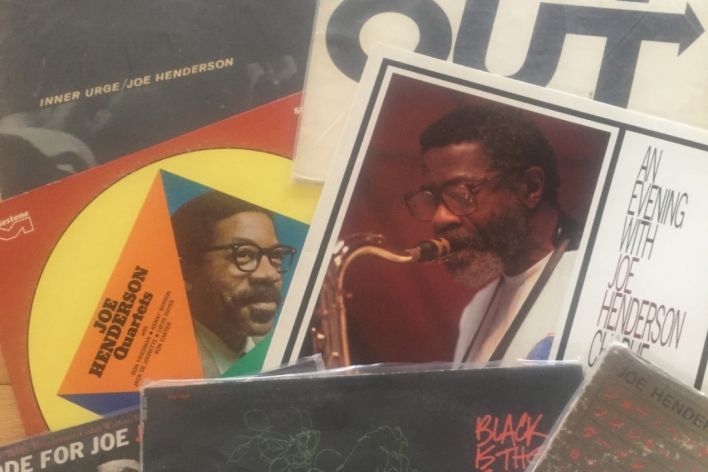 Happy birthday to tenor saxophonist Joe Henderson, born April 24, 1937, in Lima Ohio, but who came of age musically on the Detroit scene while studying formally at Wayne State University between 1956 and 1960 — and informally with Barry Harris — and, of course, working regularly in local clubs.  I grew up idolizing Joe and heard him live many times before his untimely death in 2001. Joe was the first major jazz musician I interviewed for the Detroit Free Press in early 1996, after arriving at the paper the previous fall. I’m especially proud of the chapter about him in my book. Here’s a taste:

“To a degree unusual even for an art based on improvisation, a Joe Henderson solo is an adventure. His ideas burst out of his horn like Silly String. He’ll suspend time and harmony in a fog of flickering trills and cockeyed arpeggios. He’ll swoop from his altissimo register high above the written range of the saxophone down to the basement of the horn in a blink of an eye. He’ll paint each note with its own individualized articulation, color, and texture. He’ll play shrieking overtones and seductive purrs. He’ll start a phrase in a veiled corner of the beat, hold it up to the light, and then bury it again. He’ll play so angular and outside the chords that you can’t believe it and then turn around and play a melody so pure and inside the harmony that you can’t believe something so simple could sound so hip. He’ll play anything at any time.”

Here’s Joe a few days before his 31st birthday, on April 21, 1968, blowing up a storm in a casual setting for the Left Bank Jazz Society in Baltimore with Wynton Kelly, Paul Chambers, and Jimmy Cobb.