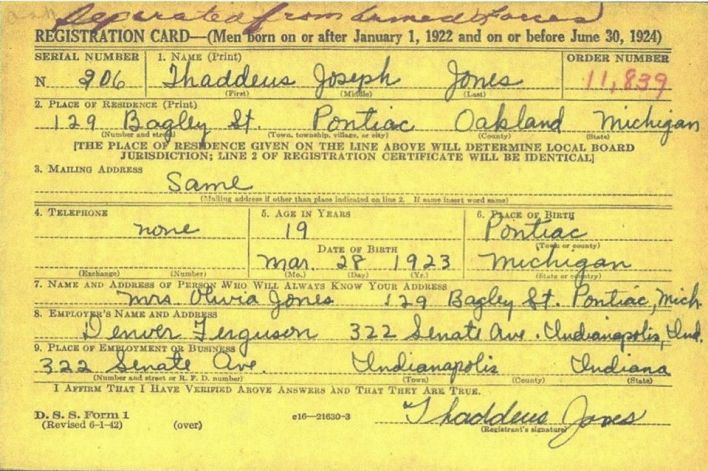 I’ve been lax about keep up this blog, but I’m going to give it another whirl starting today. For (re) openers, on what would have been Thad Jones’ 97th birthday, here’s an extraordinary document that comes via the Rare Jazz Photos group on Facebook: Thad Jones’ draft registration. Sincere hat tips to Harold Mitchell for sharing this document and for Red Sullivan for alerting me to it.

Jones was inducted into the army in 1943, so this dates to either late 1942 or early ‘43 as his age on the  registration in 19. There are so many tantalizing details and clues present in this document about Thad’s early life, starting with his h2003ome address of 129 Bagley Street in Pontiac, which is also listed as his mother’s home address. This would have been Thad’s second childhood home, where the family moved around 1937, after having lived about six blocks away at 74 Orchard Lake. (This detail per a 2003 interview with Elvin Jones that Russell Scarbrough has alerted me to in which Elvin says the family moved from Orchard Lake to Bagley when Elvin, born in 1927,  was about 10.)

Alas, Google maps reveals that there are no houses or structures currently standing at either address.

Another fascinating tidbit: Thad lists his employer’s name and address as Denver Ferguson of 322 Senate in Indianapolis, Ind., and Thad lists his address of employment as the same Indianapolis address.  Ferguson was a key figure in the history of the African American entertainment business as a nightclub owner In Indianapolis and organizer of what became the “chitlin circcut”of black clubs in the 1930s and ‘40 — he was an entrepreneur, printer, numbers runner, real estate man, club owner, and he had his fingers in booking, management and promotions. My friend David Brent Johnson, a jazz radio host at WFIU-FM in Bloomington, Ind., and  a repository of  Indianapolis jazz history, reports that 322 Senate was Ferguson’s business address. It’s not clear if this was also the address of a club. But it’s obvious that Thad was working at one of the Ferguson-owned night spots in Indianapolis, which included the Cotton Club, Trianon Ballroom, and presumably others.

With whom was Jones working in Indianapolis? It’s almost impossible to believe that he was leading his own band. There’s absolutely no record in interviews with Thad or any other documented source of Thad as a bandleader at this early point in his young career. Yet he lists Ferguson as his employer rather than a bandleader with whom he was working. Why? I’m open to speculation.

This is what we know: Thad started working with territory bands around Michigan when he was in high school, and in 1941 (at age 17 or 18) he left on a southern tour with a band led by trumpeter Connie Connell. Biographical entries about Jones  say he worked briefly with a band led by reedman Red Calhoun, before he entered the army. This suggests he might have been with Calhoun in Indianapolis, but I found a fascinating newspaper article from the Muncie (Ind.) Star from 1970 in which it’s clear that Connell ended up as a music teacher in Muncie, some 60 miles from Indianapolis. That that makes me wonder if Jones was still with Connell’s band when he filled out the draft registration. (The way to take the next research step here would be to check entertainment listings and ads in black newspapers in Indianapolis in this period for references to Connell or Calhoun.)

Here’s a link to the story about Connell.

Here’s a link to film of the Calhoun band just after the war.

And here’s incredible film of Thad fronting the landmark Thad Jones-Mel Lewis Orchestra in 1969 in Denmark. (The clip is incorrectly marked as 1970,) Other Detroiters in the band include pianist Roland Hanna, tenor saxophonist Joe Henderson, and baritone saxophonist Pepper Adams.